Some campers camp for the weekend and some just for the night. Some camp for the season. Recently Jim Cull shared with me his invoice for camping on Campsite C1  for the 1983 season.  You have to agree that Jim is not an overnight camper that  stays for the weekend. If my math is correct, Mr. Jim Cull has camped with us for 33 years.  Jim has made his reservation for 2017,  his 34th year.

Would you believe that his 2017 reservation is for campsite C1?

Jim, serves as the treasurer of the campers’ activity fund  and has been involved in many of the activities.  Jim likes to fish  and over the years he has literally caught tons of fish. Jim over the years has apparently suggested to his extended family that they might like to camp at the same campground with Jim.   His sister from Clearwater Florida has been camping on C28 for over 14 years.  At the last count, Jim and his family rent a total of six campsites.   That’s not the end of the story however, Jim’s son David has made a 2017 reservation for a campsite in the new North section of the campgrounds.   Will there be a third generation of Cool (Cull) campers?  If Jim has anything to say about it, I would say yes.

To put things in perspective we in 1987 computerized our billing system.  We started by giving each camper an account number.  Jim  was assigned the account number of 25.  As a camper moves on and a new camper moves in a new account number is used. The last account number issued is account number 1365.  That means that Jim is one of  1365 seasonal campers that have been in the campgrounds since 1987. Today Jim is the only camper that has a two digit account number. That makes Jim the longest reigning camper.  Jim was given the title of Special Camper in 1995 since he spent part of his time talking to perspective campers during the normal work week when other camper were away from their camping site.

If you see Jim let him know that the above not only makes him a Special and but the senior camper as well.   We wish Jim well and hope that he has many more years of enjoyment, camping, fishing and just drinking a cold one when enjoying his view of the lake from campsite number 1. 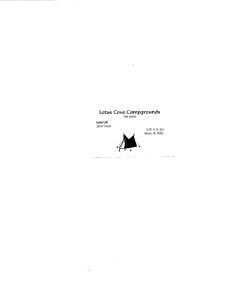